- January 10, 2022
And just like that H turned 8. We started the morning with homemade candy waffles and ended the days with a raspberry mousse cake. This child of mine is oddly not a big fan of chocolaty desserts.. sigh. Otherwise it was a pretty normal day.. we had come back from a trip the day prior so we all got covid tests and stayed home.
This weekend though we had a birthday party for him. Last year we had refrained, being in the thick of the pandemic. This year with them already going to school and participating in sports etc we decided it would be fine to have a small party. We opted to not have it in our home. We hosted it at Knockerballs, its a cool indoor play area with life sized games like Human Foosball and Hungry Hungry Humans.. D had attended a few birthday parties there and I always thought it was such a fun place. The entire space was booked for us which made it feel safer.
I used Paperless Post to send out the invites. Mainly because I did a sponsored post for them a couple of years ago and they gave me so many coins that I am still working my way through them. Still have 989 left. lol.
Next of course are the goody bags. 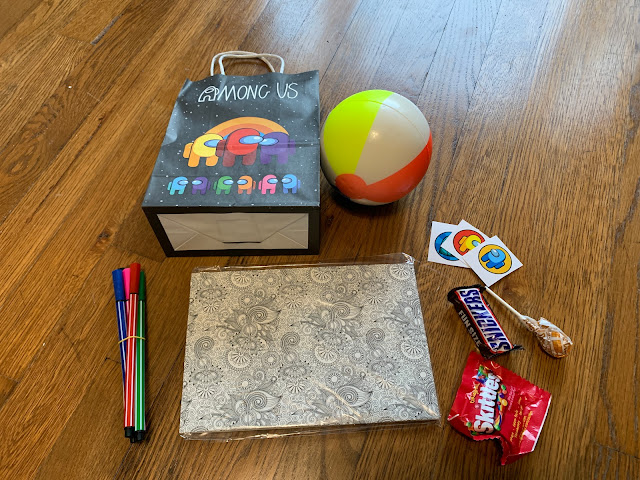 I got the Among Us gift bags and stickers from Amazon. The cake will also be Among Us themed.. for those not in the know it a popular app/game. I found these cool 3D puzzles on Amazon as well. You color them first.. pop out the shapes and create your puzzle. The markers came with it. A couple of candies and a foam ball from the dollar store. 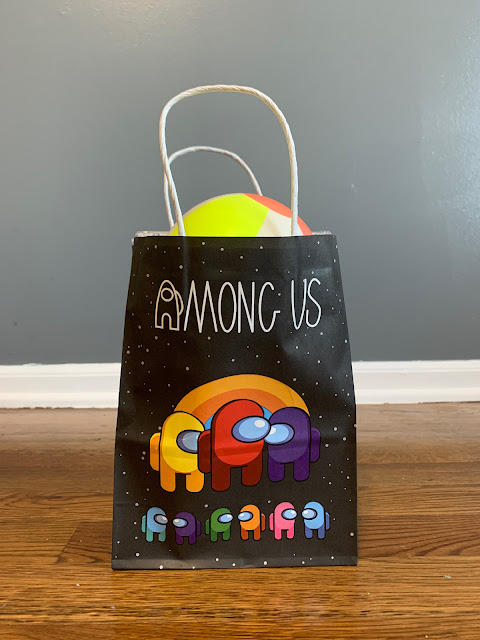 As per usual we got our cake from Wegmans and decorated it at home. 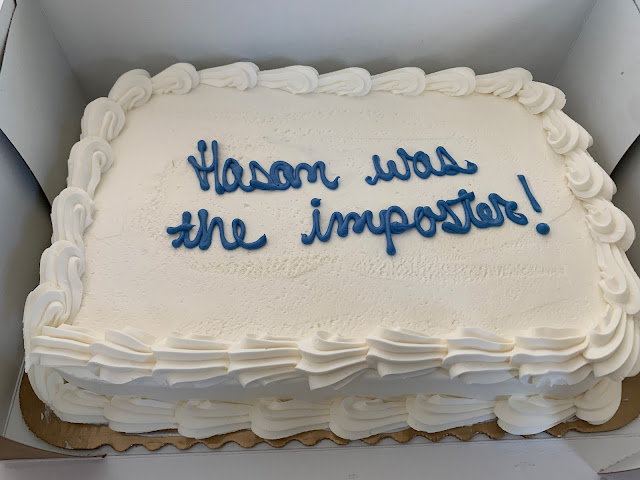 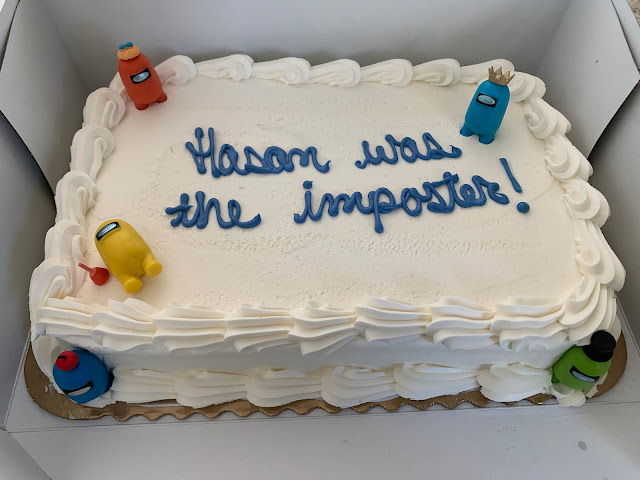 I bought the little Among Us figures also from Amazon.
The party itself went by without a snag.. it was nice to see the kids interacting and just being kids. 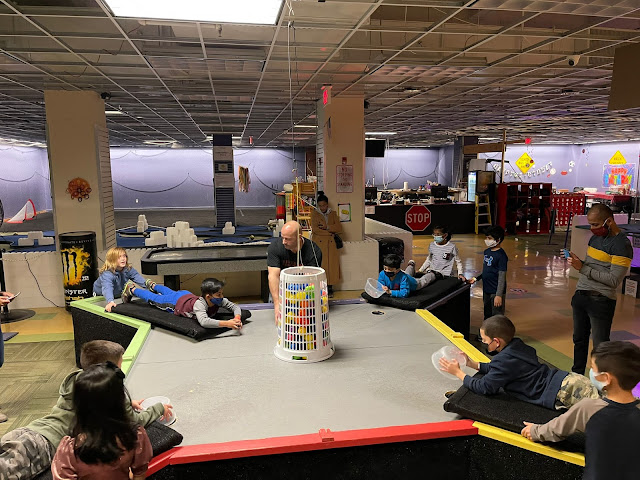 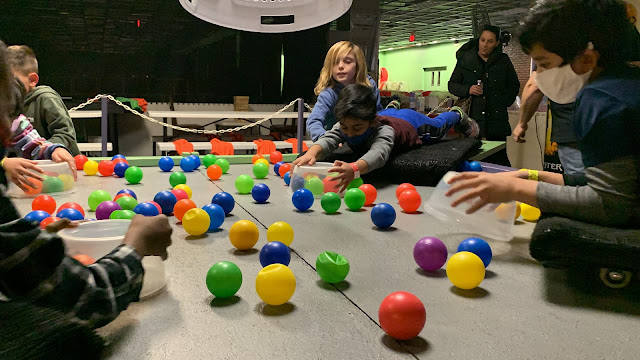 The fav was a game of Hungry Hungry Humans. 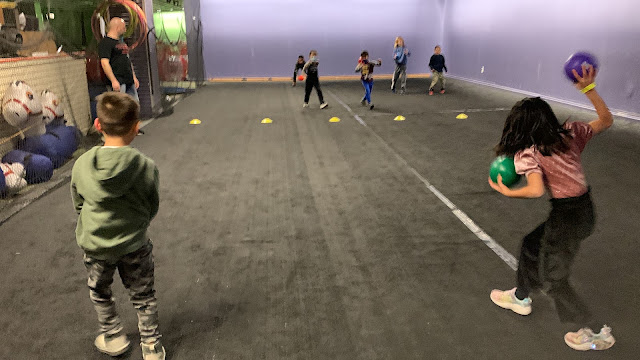 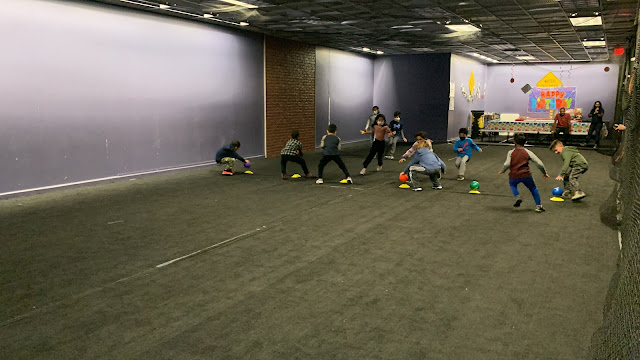 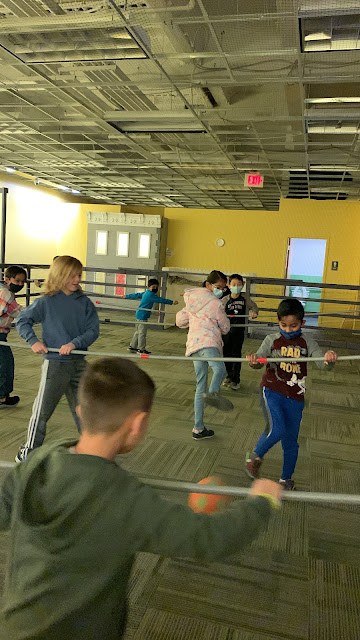 Human Foosball.. it was tricky for the kids to always keep their hands on the rope. They also played Knockerballs but we have no pictures.. just videos. 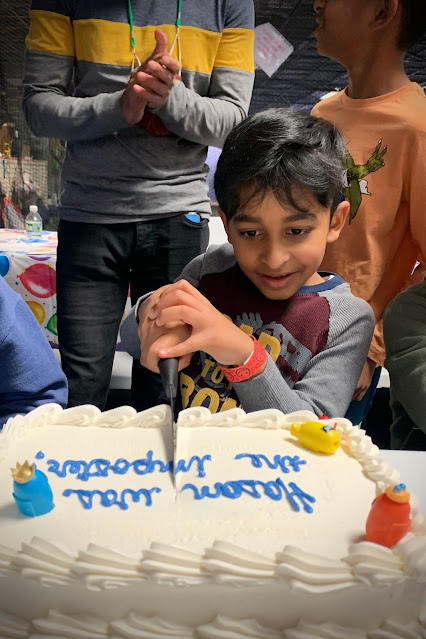 We forwent candles.. and now that I think about it who ever came up with the idea of blowing out candles.. and why did we never think about the explosion of germs before?
Another successful party for the books. phew
Etsy           Instagram           Twitter           Bloglovin
8 birthday happy birthday knockerball

Mica said…
Happy birthday to H! The party looks so fun, the hungry hungry hippos game is awesome, I've never seen anything like that before!

Hope that you had a lovely weekend :)

Jennifer said…
Happy Birthday to him!!!

Marie Smith said…
It is wonderful to see children having fun these days! Happy birthday to your sweet boy!
1/10/2022

Heather{Our Life In a Click} said…
You are right about the candles! Yuck! What a fun party. That place looks awesome and perfect for his party! Happy Birthday H!
1/10/2022

Jeanie said…
I'm with you on the candles! I'd relent if it was on one cupcake for the birthday kid (or the trash can!) but nothing else! It looks like a great place for the kids to party.
1/10/2022

Kelly said…
So many fun things about this birthday celebration! I've never seen the life-sized "hungry, hungry, humans"!! I love the 3D puzzles. I might have to get some of those for my grandkids.
1/10/2022

Billie Jo said…
Happy Birthday to your little guy!
What a great party for him and his friends. I would love a slice of that cake! And yes. No more candles on cakes!!!

Haddock said…
Dodge ball is a real fun game and it calls for some real quick body movements and good exercise for the brain too.
1/10/2022

Red Rose Alley said…
Happy Birthday to your son! Oh, that cake with the frosting looks so Yummy. The gift bags are cute for the kids. I'm not familiar with this theme, but I'm sure having grandkids, I will in time. The play area is a spacious place to have the party. Love that last picture of him cutting the cake. Eight years old, what a fun day to remember! You did a great job on everything.

Red Rose Alley said…
ps.....I'm so sorry to hear about the passing of your close family friend. Sending thoughts of comfort and love.
1/10/2022

Jodie's Touch of Style said…
What a fun place to have a party. I would love that for mine!!
OXOX
Jodie
www.jtouchofstyle.com
1/10/2022

Laura B said…
This looks like such a fun birthday party! Happy birthday to your son!
1/10/2022

ALLIE NYC said…
Wow 8 years old! He is getting up there, next thing you know he will be driving a car, graduating high school, going to college and getting married LOL just kidding. You still have plenty of time! : ) You looked like you guys had a great time and a great celebration.

Emmylou said…
That's so awesome to see H was able to celebrate this year:) Happy birthday. Love the Among Us theme:D
1/10/2022

Debbie said…
happy birthday h, mom always throws you an awesome party!! it sure does look like a lot of fun!!

Ginny Hartzler said…
What a wonderful party this was, you really know how to plan a party. I looked at your color and make a jigsaw puzzle on Amazon, and am buying one!!
1/10/2022

Christine said…
Happy birthday H! Well celebrated. Takes me back to the days when we did that for our kids.
1/10/2022

Kathrine Eldridge said…
What a cute birthday party! So glad he got to celerbrate this year!

Penny from Enjoying The Simple Things said…
Happy birthday to H! Looks like a fun day.
1/11/2022

Carrie said…
I'm so glad he was able to have a fun party and that cake looks delicious! Happy birthday to him!

Deb Nance at Readerbuzz said…
I love all those happy faces! Happy birthday to your fellow!
1/11/2022

karen said…
Happy birthday H! It's nice he was able to have a celebration amidst the chaos these days :)
1/12/2022

Doused in Pink | Chicago Style Blog said…
What a fun celebration! Happy birthday to him!

Amy Johnson said…
It looks like he had such a wonderful birthday party!
1/15/2022

Sparkles and Lattes said…
Human Hungry Hippos is so cute. I think that is a cool idea. Looks like it was a fun birthday party!
1/18/2022