A Day in Fes

- May 21, 2018
After leaving the desert in the morning we had a 7 hour drive ahead of us to Fes.. with a few stops along the way. The drive to northern Morocco was very interesting.. the scenery changed drastically.. from dry rocky terrain to lush greenery.. it almost felt like we were no longer in Morocco and maybe parts of rural Italy.. We arrived in Fes in the early evening.. Just like in Marrakesh we were staying in a riad in the inner city.. but what we found different from Marrakesh was that the outer city.. the main city was so much larger than Marrakesh.. so much more modern looking. When we arrived near the medina we were greeted by a porter as well as the hotel manager who both immediately embraced the boys and led us to Dar Victoria Riad. 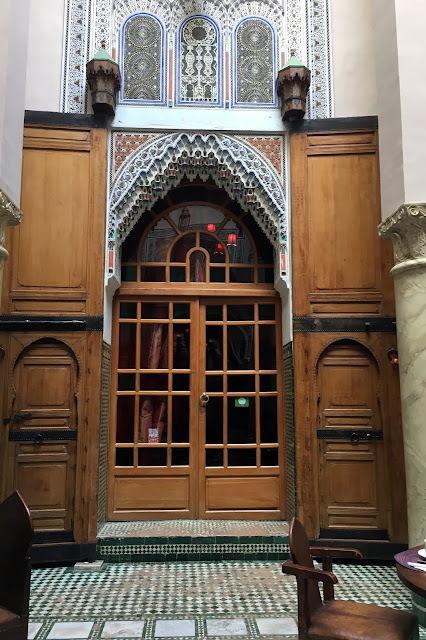 The door to our room.. it was a two storied room with a sitting area, bathroom and D's single bed on the ground floor 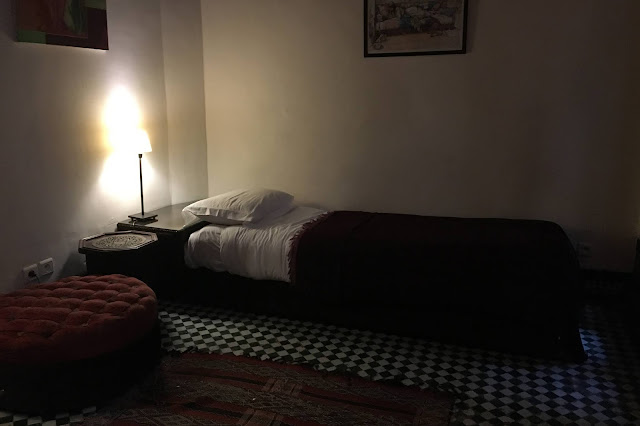 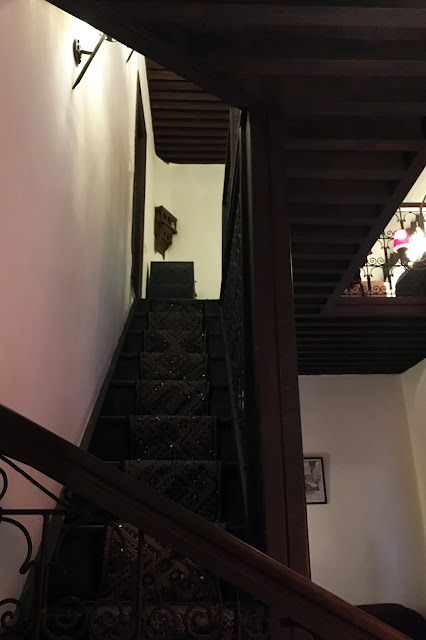 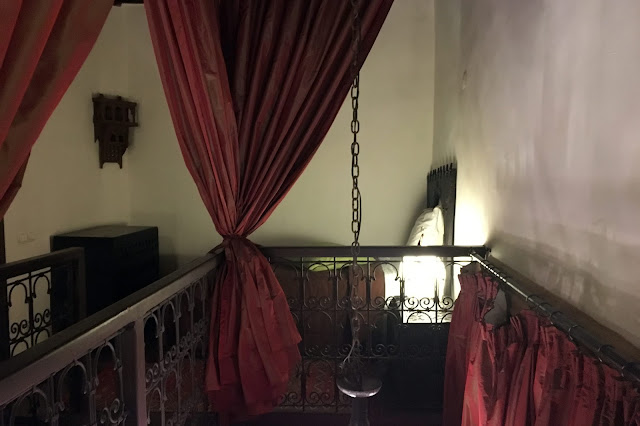 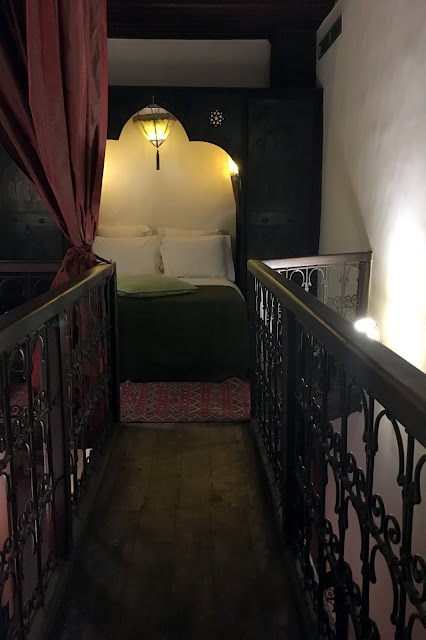 and upstairs was a single for H and a queen for us.

We were exhausted after the long journey and the only thing on our mind was dinner.. preferably non Moroccan. I had heard about a great thai place a 20 minute walk away.. this would be a great way for us to get a lay of the land.. so we set off. NOTE - we used offline google maps to navigate the medina's with little to no trouble.. we would download them when we had wifi at the hotel or at restaurants.. everyone was more than willing to share their passwords. A few minutes into our walk and we were already not loving it.. It lacked the charm of Marrakesh.. had an abundance of extra unpleasant smells that Marrakesh did not have and the people had their scam game ON!

After many winding surprisingly uphill alleys and lanes we found the thai place.. Maison Moi Anan. It was hidden in a tiny little lane we walked by twice.. again Thank God for Google Maps! Oh good food.. our bellies so happy :) On our way back these kids teenagers.. I am so old would not leave us alone.. they insisted on giving us directions.. even when we refused they self elected a volunteer to walk us to the riad.. we ignored them and continued with vigilance while our self proclaimed tour guide walked ahead of us.. then when he felt he had walked us far enough he wanted us to pay him for his troubles!!! 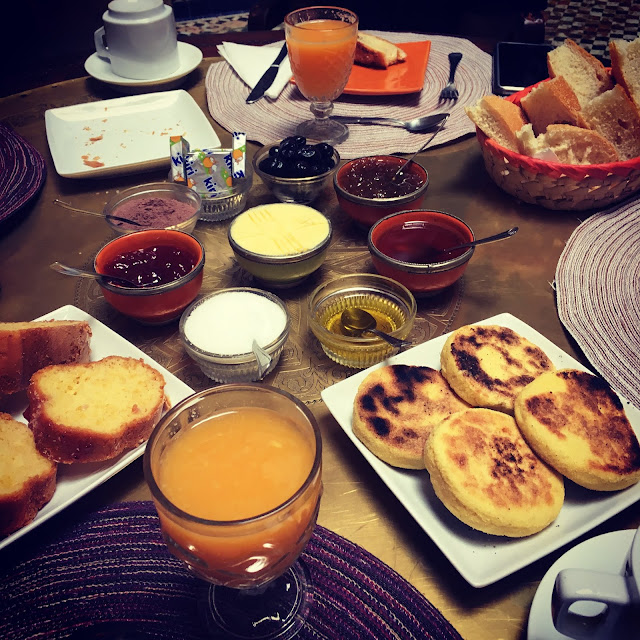 Breakfast the next morning.. and off we went.. 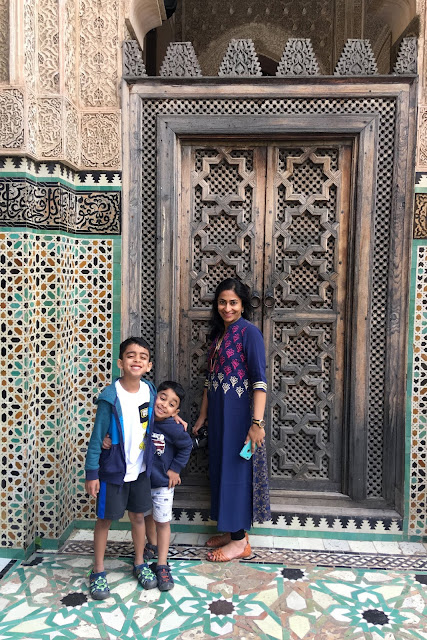 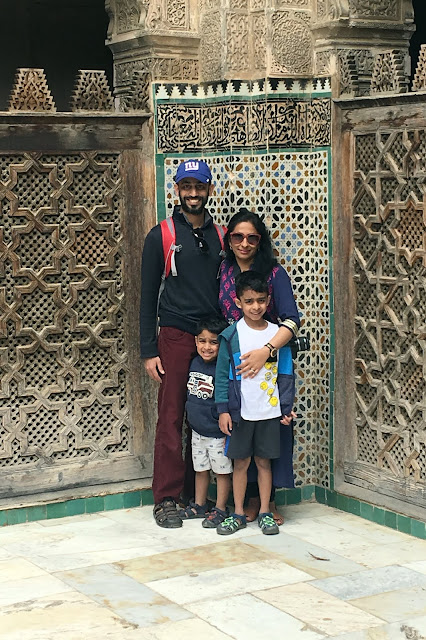 inside the Madrasa Bou Inania 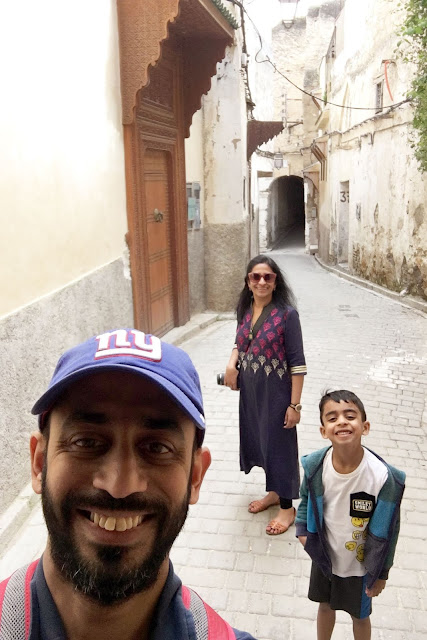 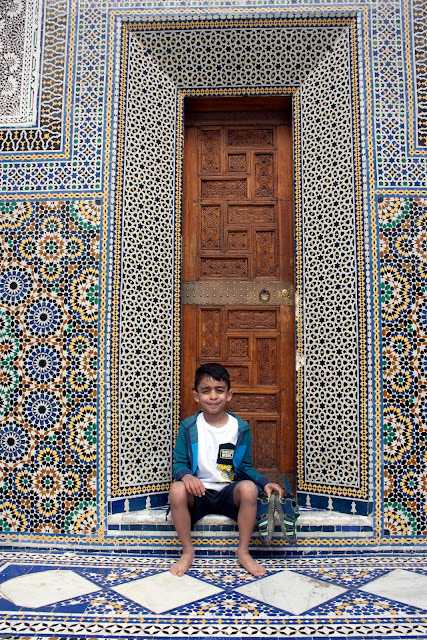 We were feeling a bit peckish when we spotted 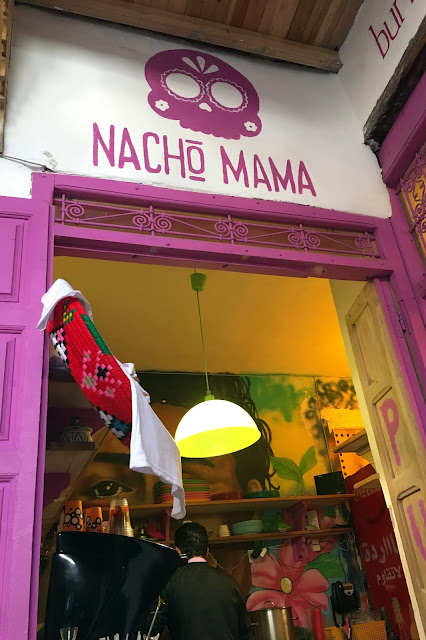 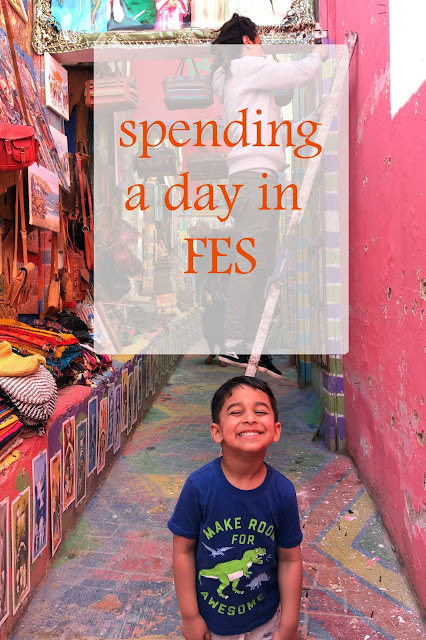 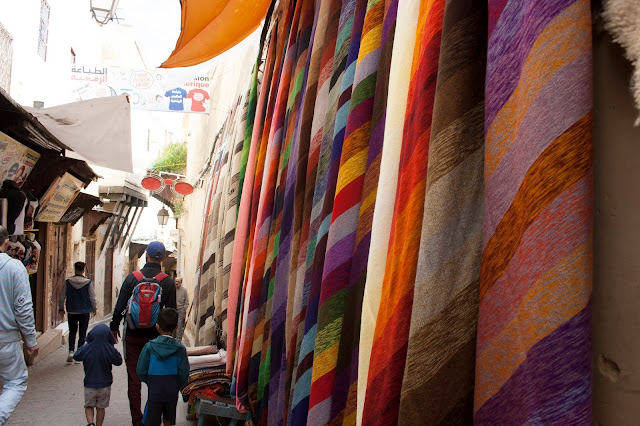 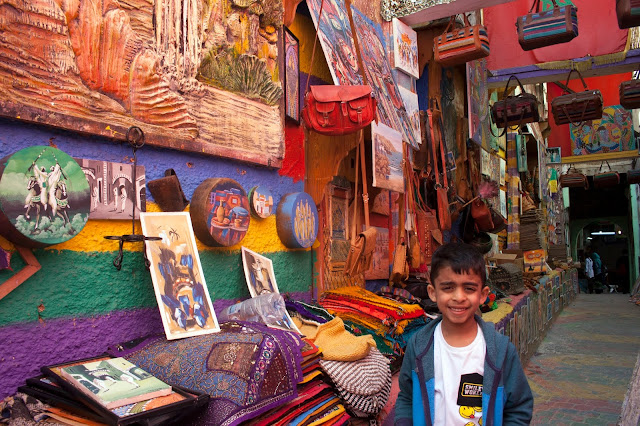 for lunch we were on the look out for Cafe Clock.. they serve camel burgers and we wanted to try them. The cafe was tucked in a teeny tiny little alley.. D spotted it.. 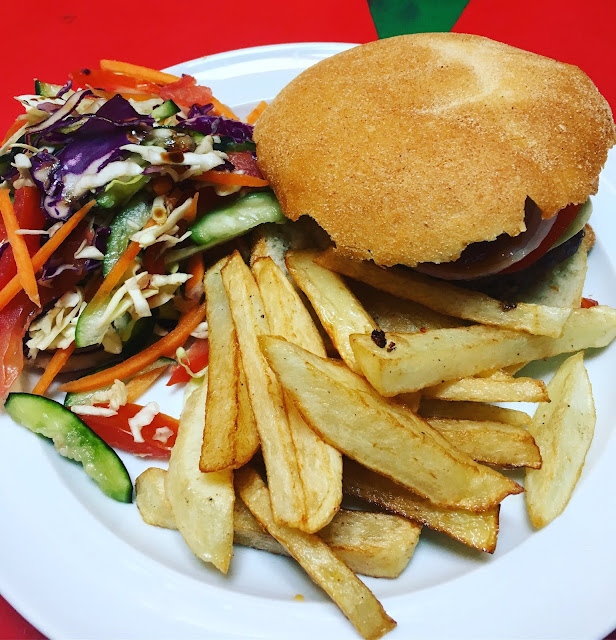 The burgers tasted like burgers.. the kids couldn't even tell the difference.

and now for the highlight of our day.. hands down the best thing about Fes.. the Merenid Tombs. Well it was not really the tombs per se but the hill they sat upon.. the 360' view.. it was stunning.. I could have spent hours there.. 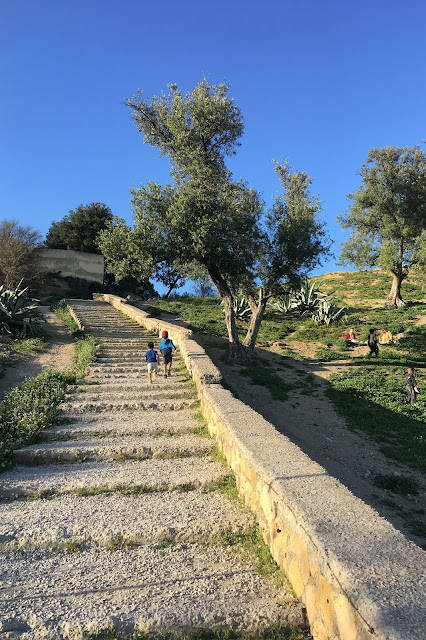 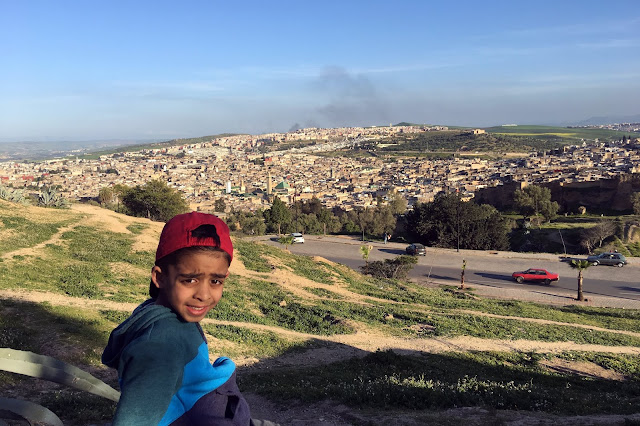 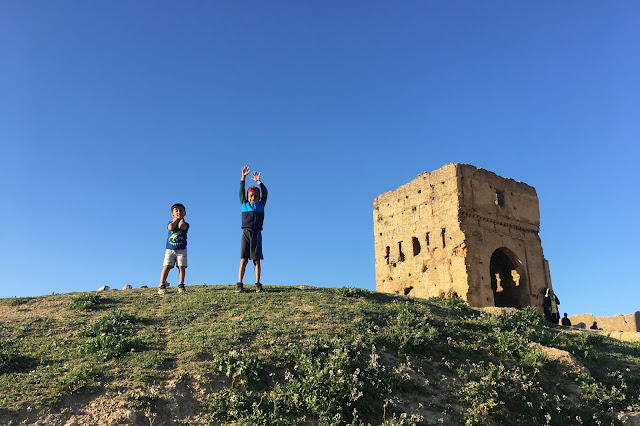 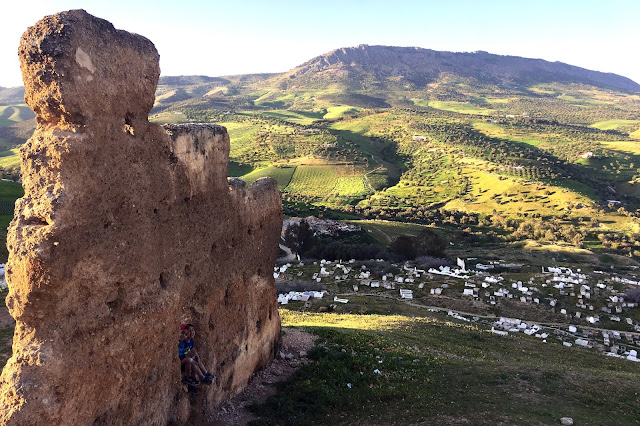 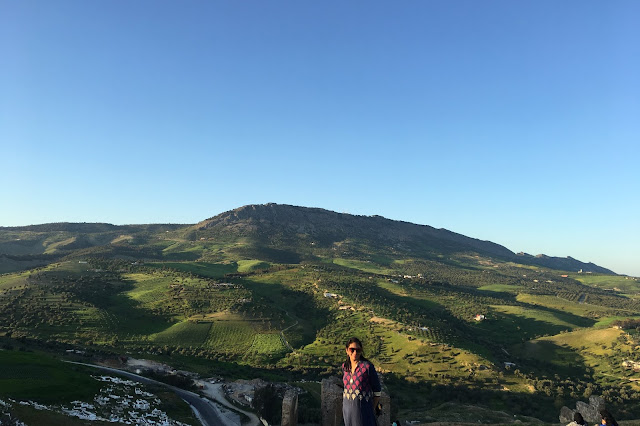 The pictures do not do justice to the spectacular view.. it was a bit of a walk from the medina.. some people were taking taxi's there.. but we like to walk.. we went back to the same thai restaurant for dinner again.. the kids were happy.