D went off to first grade... FIRST GRADE!! This was his first time on the school bus and I must say he was such a good boy.. so excited. 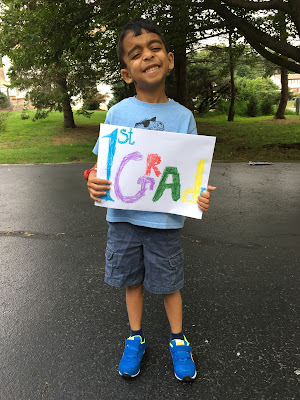 H was a whole different story.. he too was very excited to go to school. He too wanted a backpack which he did not need like his brother, I had to fish out one of D's old backpacks. He too wanted to ride the school bus like his big brother, also not happening. I will have the pleasure of driving him for the next three-ish years.  After much explaining that mommy's minivan was just like a school bus he was ready to go 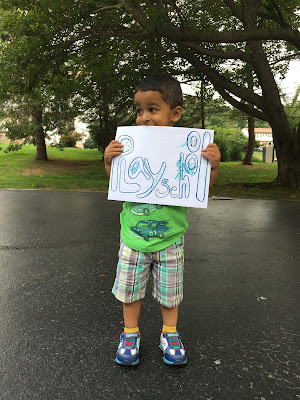 He went to his class and when I asked if mommy can go he said yes.. and so I left.. so surprised. D cried the first week he first went to school. What a big boy H was.. :)

And then when I picked him up I found out he pretty much cried the whole three hours he was there, and the same happened the next day.. I managed to sneak out while he was playing but he still cried most of the day, the next day he would not leave me. He knew exactly what was going to happen. I played with him a long time before I had to leave the crying little munchkin behind. :(
He sobbed every time I picked him up, he clung to me the rest of the day when at home. Thursday night he firmly told me he was not going back. Friday morning he reminded me of the fact he was not going back. I had to trick him to get him in the car, told him we were going to do groceries.. he started crying the moment we pulled into the school parking lot.. I had to pry him off me :( :(
He told me he wants to go live with his grandma (my mom) so he doesn't have to go to school. Ever.

Monday will not be fun. 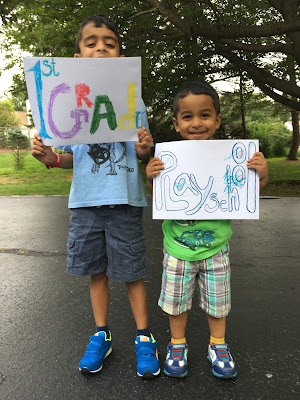 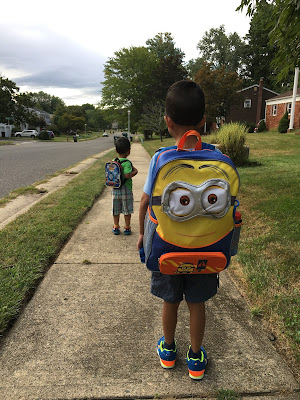 D thankfully is enjoying first grade. Every day when he gets off the school bus he starts with 'do you know what happened..' and then he shares with me all the funny things they did in class.. not all of his stories make sense out of context but watching his big eyes get bigger and his facial expressions.. you can tell he is happy. :)

Jennifer Hays said…
Aw, it will get better with H. I promise! My son was easy to send to school, no issues whatsoever, but my daughter was much clingier. I would say it took a couple of weeks before she was really able to part from me easily, but it improved quickly from there and she loved school. She has always been more attached to me. It's a good thing, really! It will be okay. I'm glad school went well for D. They both look very happy in their photos. I wish them both (and you!) a wonderful year. :)
9/12/2016

Carrie said…
Such cute photos of your kiddos :) Glad they are enjoying school so much. Love the 'play school' sign. My daughter just started 2nd, it's amazing how many stories they have every day about school.

Emmylou said…
Aaaaaw...look at the kiddos:) So cute. And H will adjust...the first week my youngest went to school, she cried everyday for the first week. And then, she gave up hope:P
9/13/2016

Anonymous said…
LOL; H is so cute. Sorry he's having a time adjusting. That doesn't help you at all, but he'll get used to it. Can he bring a picture of his family and put it in his cubby? Glad D was so happy with his first grade class.
9/13/2016

karen said…
my son cried every single day of preschool for the entire year. He exhausted me. Now that he is 23 years old he told me it was because the teachers would place his toy from home on the frig until after class. WHAT? I don't know why he didn't tell me at the time and he had no answer either...

Veronica Lee said…
He will adjust. Just give him time. I had issues with my elder son (he cried for three weeks) but Rodney adjusted easily on his first day of school in First Grade.
9/14/2016

Rowena @ rolala loves said…
Aw poor H! He probably just needs to get used to the school routine. I hope it gets better for him. At least D is having a good time.
9/14/2016

Lisa said…
It's so hard to leave when they're crying isn't it? I'm sure it will get better! Hoping he finds a little buddy he can hang out with. That might help. He's so adorable!
9/14/2016

Linda Stoll said…
Oh what little cuties! Hopefully it won't be long til they're both happy in their classrooms ...

Parrott Ponderings said…
Aww they are such cuties! I am happy your big guy loves school... It would make it so difficult for them both to be having such a hard time with the transition. I am sure it will get easier as your little one gets more used to his school. I am homeschooling, but my son does a few different clubs throughout the week without me, and he is having a really hard time with drop offs lately too. I just keep telling myself he will get used to it and it will get easier... but it is never fun to have to pry them off of you.
9/14/2016

Jess said…
Aww, I do not look forward to sending kids to school for the first time! At least one is doing great, and I hope your younger adjusts after a while.
9/14/2016

Decor To Adore said…
Oh these wonderful images of your boys made me smile!
9/14/2016

Loulou said…
Poor baby :(. If it helps, my friend's child did not enjoy school in the least at first, but later got upset when weekends rolled around because she couldn't see her new friends for those two days.
9/15/2016

Unknown said…
Aww. Back when I was a kid, I remember crying whenever my mom leaves for work. It's sad but also sweet how we get attach to our moms. I know they'll get used to it too! :) Hope to hear from you soon!

Sisters and Glitters said…
omg they are SO cute! Have a great week! xo, Sophia from http://www.sistersandglitters.com
9/16/2016

Vanessa said…
I remember being like that as a kid since I started school early, and I was too-attached to my mom. But now I'm crazy and beyond independent. They'll be fine, good luck getting them through the tough early days.
9/16/2016

Your Invisible Crown said…
I love those pictures where they hold the signs, must be fun taking one each year, and lining them up when they're older. And I also like the minion backpack :-)
9/17/2016

Pumpkin Delight (Kimberly) said…
I don't know how I missed this one! I'm so glad first grade is going well and I'm sorry that preschool has been rough. They all end up being fine about going eventually, but I'm sure it's very emotional for you as well when it makes him upset. I hope he is adjusting since this post.
9/18/2016