- August 22, 2016
This was not the first post I was expecting to write after returning from my summer hiatus. After a great trip back home and an even more fun stop over we were all a bit home sick and so happy when we finally landed in JFK. Our 8pm flight stood on the tarmac for another hour because of some rain which caused the departing flights to be delayed and hence an airplane traffic jam! what annoys me is that with all the technological advancements why do we still have to put up with these slight weather delays.. it was light rain not a thunderstorm!!

We disembarked the plan around 9:30pm making our way to a hallway that led to stairs that would eventually lead us to immigration. Because of all the delays there was a significant crowd.. everyone tired.. and then we heard the vibration.. it took a second to place and then we saw it.. everyone was turning and running.. running towards us! I had H sleeping in my arms.. I ran.. I didn't know what to do.. I went to the nearest wall and clung to it.. H still in my arms, my eyes searching for M and D. I spotted D standing dazed in the middle of the hall.. the stampede of people coming his way.. I screamed his name.. I screamed.. I couldn't leave H.. where was M.. and in a flash the screaming people passed by and I closed my eyes holding H closer.. and then it was over.

The first thing I did was search the ground afraid to find my baby boy on the floor somewhere.. But he wasn't . thank god.. thank god.. and then I heard M call my name and he had D.. D was fine.. crying.. a small bump on his head.

But it wasn't over yet.. only minutes later we were faced with another stampede. Everyone was confused.. no one knew what was going on.. a terror attack? Families were separated,  a mother searching for her child.. a woman with a bleeding leg.. we were ushered into a room.. down a flight of steps.. up another.. people started to push.. people were losing their calm..

After what seems like an hour we were told the coast was clear, we could head back downstairs for immigration.. finally.

Lines began to form and it was as if order had been restored.. We were probably 30 minutes into the process, still in the immigration line when the police rushed in screaming 'everybody down, everybody get down' and that's what we did.. Stayed in that position for.. I don;t even know how long. SWAT walked through us.. they were looking for something.. or someone.. we heard talks about a shooter.. we heard talks of Terminal 8 being shut down as well.. we were in Terminal 1. 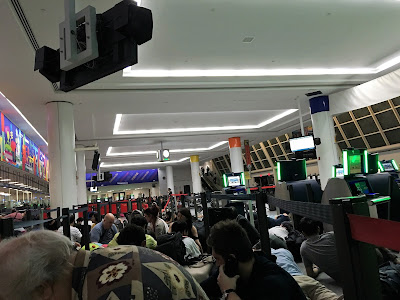 After some time we were allowed to get up again but still no word on being able to get out. It was sometime before midnight that the immigration officers returned and it was 1:10am by the time we left the airport.. another hour before we finally got home.. Home..

The next morning when we checked the news to see what exactly had happened.. turns out false reports had been called in claiming shots had been fired outside both Terminals 1 and 8 due to which we were put under lock down while the police searched for a shooter. But no one was found, no shell casing, no evidence to support the reports..

Sorry to start off with such a downer but I felt I had to share.