- September 07, 2015
This June D turned the big number FIVE! He had the theme all picked out months in advance and he could hardly contain his excitement.. all the more incentive for me to step up my birthday planning.. thank you Pinterest I do not know how we ever lived or planned parties without you!

His theme of choice.. Jake and the Neverland Pirates.

The Invites: I found this super cute printable online here 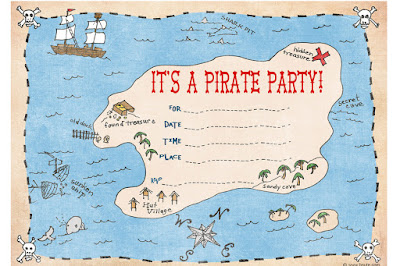 The Party:
We stared with having the kids dress like a pirate.. I bought foam hats and stickers from Oriental Trading Company for the kids to decorate. Interestingly enough.. kids found it not so interesting.. many simply refused to decorate a hat.. some came back to it later and just a handful actually wore them. What was even less interesting to the kids were the eye patches I had handmade :( but the foam swords I had scored after repeated visits to the Dollar Store were a huge hit.. 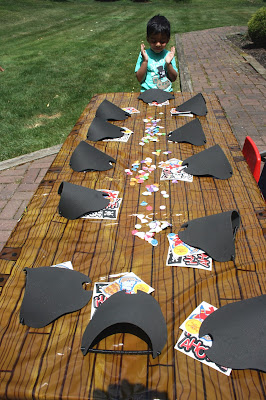 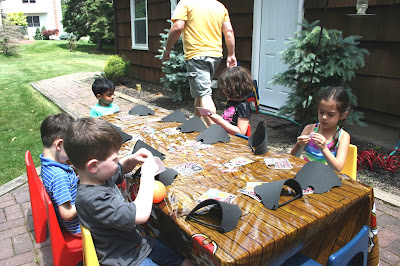 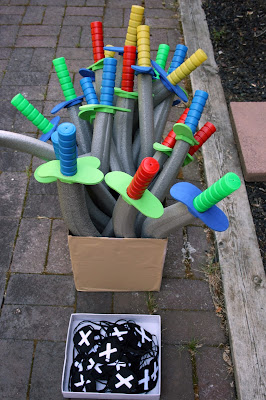 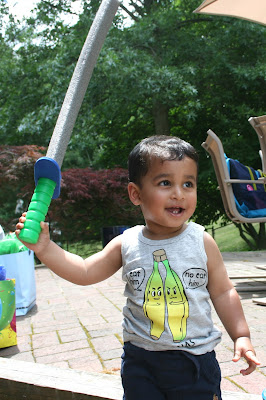 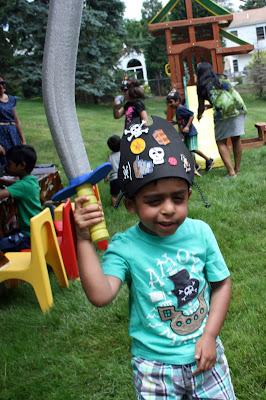 Next we had two ring toss games.. this was meant as an activity to kill time until everyone had arrived. D and I enjoyed making and decorating both activities together.. he really loved being a part of the party planning I cut the centers out of plastic plates to make the rings. 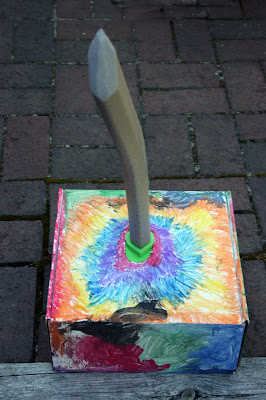 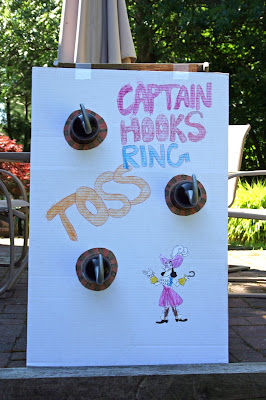 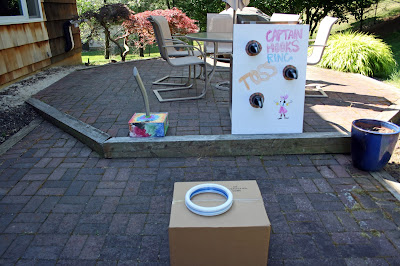 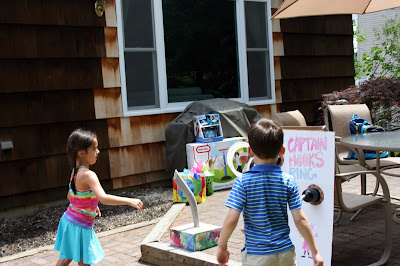 Once all the kids had arrived we had them walk the plank.. which we had made with some left over wood we had. The kids loved it.. it was harder than they had expected. 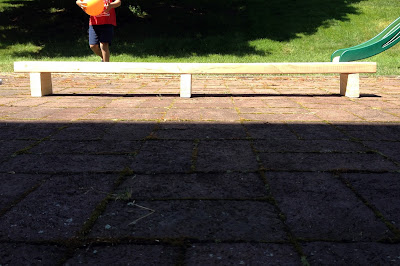 After they had walked the planked they found themselves ready for a game of musical islands.. the game was the same as musical chairs except with islands. once again a handful of children opted out of the game and instead wanted to play on the swing set. We had cut out cardboard ovals.. D and H decided to color some of them. 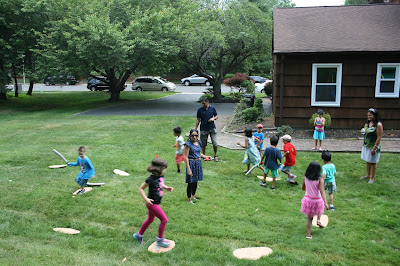 Once a winner was declared and everyone caught their breaths from all the crazy running around we directed them towards our pirate ships and cannon balls.. 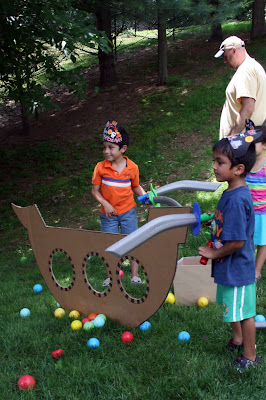 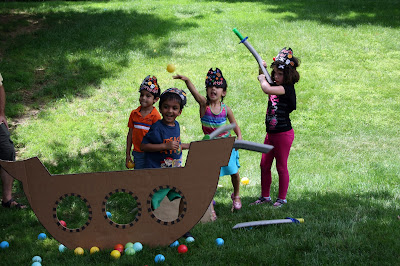 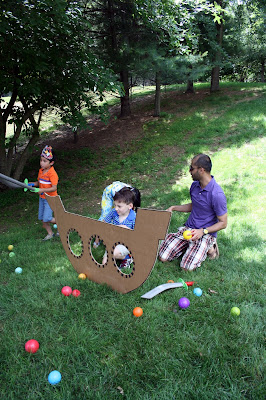 I cut the ships out of a large box and outlined it with a black marker. We used paint sticks to prop the ships up in the backyard and filled two diaper boxes with colorful balls and let the kids use their imagination.. 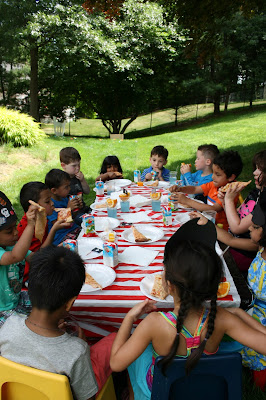 We kept lunch simple.. pizza and juice boxes and a cute jello treat.. I found the sails here 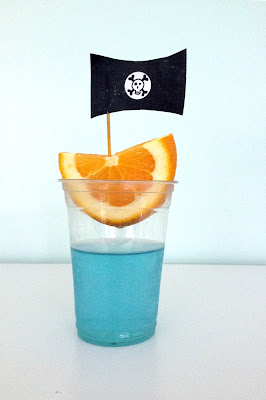 The cake too we kept simple.. a plain white cake. D requested a border.. and I let D decorate the cake with his Jake and the Neverland figurines. 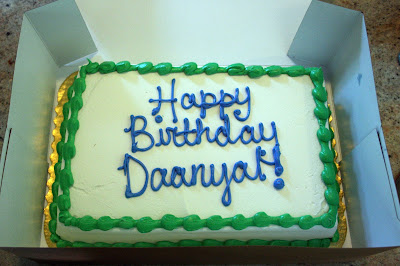 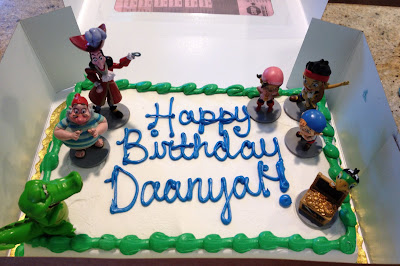 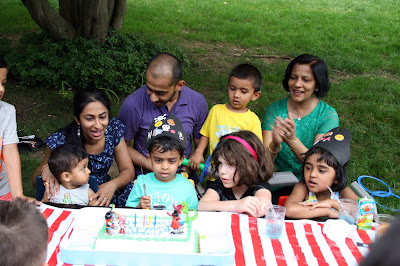 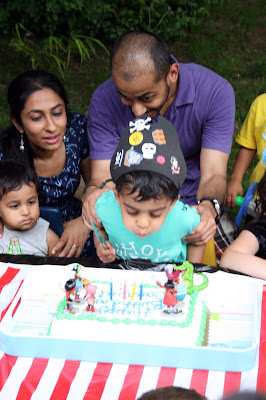 Our backyard is a slope.. M was afraid D would fall right into the cake if not held back!

Lastly D and I created treat bags with a few gold doubloons chocolate coins in them.. they were fun to make, it was especially fun to see D's artistic side. 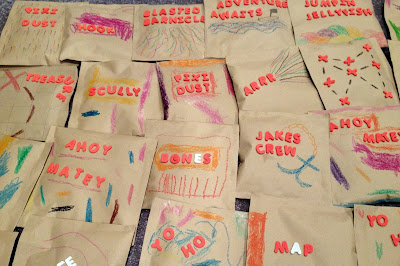 Phew.. that was exhausting.. but to see the kids have fun.. to see how happy D was.. so worth it. 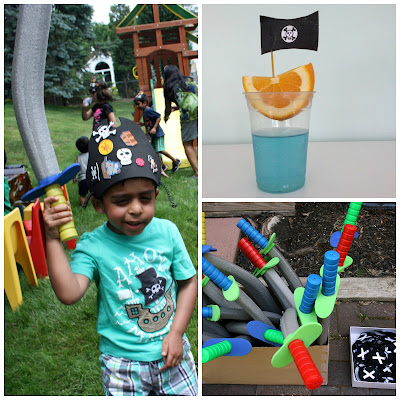 Jennifer Hays said…
What a great party! You really went all out. I love the jello cups, those are really clever. The invitations are adorable too. It looks like D had a very happy birthday. I can't believe he's 5 already! Is he going to kindergarten this year? My kids both have September birthdays but they had to wait until the year they were turning six to start school because our cut-off date is Sept 1.
9/07/2015

Decor To Adore said…
Oh this wonderful event brings back such happy memories of my own pirate loving boy.
Have a happy and wonderful week!
9/07/2015

Stefanie said…
Splendid job! I love the pirate themed games. His cake looks yummy. I really love how your son had a hand in the planning of his party.
9/07/2015

Pumpkin Delight (Kimberly) said…
Oh wow! That looks like a fun party. The kids had a blast I'm sure.
5?!?! Does Kinder start tomorrow? :) (or maybe it already has)
I hope he has a great first year of elementary school.
9/07/2015

Emmylou said…
Hena, you guys did a fab job with this theme! Who doesn't love pirates?!?! :D Thanks for sharing these pics of the party. Great inspiration.
9/07/2015

Gabrielle said…
The online print-out invitations you found are brilliant, what a great idea! The theme to the day seems to have gone down a treat :)

Hena Tayeb said…
Thank you.. Pinterest to the rescue!
He starts kindergarten tomorrow! But he is not going to public school just yet. Bigger changes yet to come.
9/07/2015

Hena Tayeb said…
they did! which made the months of prep work totally worth it..
he starts kindergarten tomorrow!! But not going to public school just yet..
9/07/2015

Claire said…
This is so cute, I love the party!

Frannie Pantz said…
Wow you put so much work into this party! It looks adorable! Happy belated birthday D!
9/07/2015

Unknown said…
What a cute look! Love how you spiced it up with the colorful combination

BEAUTYEDITER.COM – Beauty Blog said…
This is really nice! Have a great day. :)

Krugthethinker said…
Hena, what a beautiful party! I am so impressed with all your great ideas, especially musical islands:) I am sure this is a party D will always remember! And even H looks so big too! It seems like just yesterday you were announcing your pregnancy with him. Time flies when you're having fun, I guess! Happiest of birthdays to D, and happy fall to your beautiful family!
9/08/2015

ReStyleGraphic said…
Happy Birthday! Pirate party is so cute. I liked that you used pinterest to plan, I will definitely try it too.
9/09/2015

Christina said…
The invites are super cute! & I really like the ring toss. That's a cute idea. :)

sonia // daring coco said…
What an awesome 5th birthday. I love that you guys made extra effort with party favors and the activities. Most people just buy it all but I think it is so much more fun and rewarding to create them yourselves. Plus they looked incredible!

Jicsi said…
Aww that's so cute. It looks like so much fun as well, so many activities! You can tell the effort that went in just by looking a the pics. I bet it was a great day! x
9/11/2015

Jane @ anothermommablog.blogspot.com said…
Looks like a fun party! I know it, kids party can be so much work, but definitely worth it at the end when you see them filled with joy.
9/15/2015

Cam & Sarah said…
How fun. I loved that D picked the theme and was active in planning it. I do find kids rather just play than do organized games and crafts. The cake turned out great with using the figures you already had too!
9/15/2015

Sarah said…
This is adorable! We had a pirates and mermaids party for our little girl this year. The pirate ship is great. So simple, but I'll bet the kids loved it!
9/16/2015

Becky Wilkinson said…
I'm yet to meet a child who doesn't love pirates! What a great way to spend a birthday party! Thanks for sharing with #ToddlerApprovedTuesday
9/27/2015