The Highline Park and Chelsea Market

- June 15, 2015
This year we had a great memorial day weekend.. the perfect balance of activity and relaxation.. the only thing lacking was sleeping in.. but we haven't slept in in over five years so we know better than to expect that!

M worked from home on Friday and right after lunch we piled into the car just before nap time and headed to New York City. The destination was the High Line Park and the Chelsea Market.. after living so close to the city for over seven years we realized there is so much of the city we haven't yet explored.. in fact I sometimes think we have barely seen it at all.. so from now on we hope to venture into a new part of the city every time.. so for my New York readers.. tell me where should we explore next?

I had wanted to visit the High Line Park ever since I had heard of it.. and for those who haven't heard of it the park is an elevated linear urban space converted from an old and unused railway. And the Chelsea Market.. once the Nabisco Factory.. where the Oreo was invented is now a large food hall.. with some great eats and also houses the offices of YouTube and Food Network.

We of course started at the Chelsea Market.. I grabbed some doughnuts at the Doughnuttery.. unfortunately our least favorite of all the amazing food we ate.. but it was cool watching them being made. 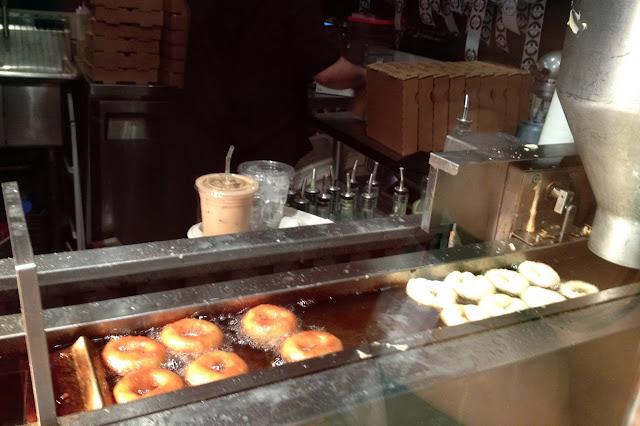 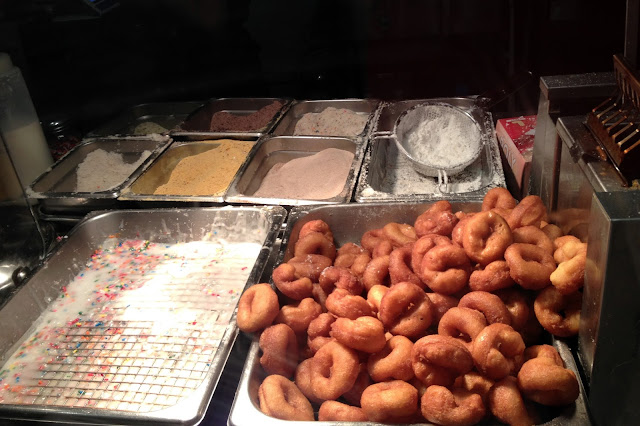 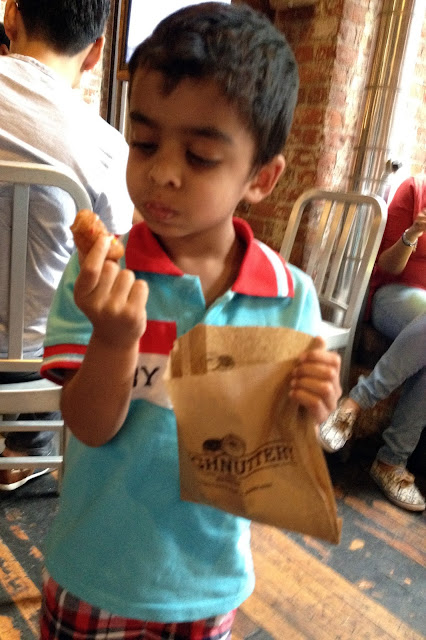 While M got a chocolate, banana, strawberry crepe from Bar Suzette... mmm so good and watching her create these.. it was masterful. 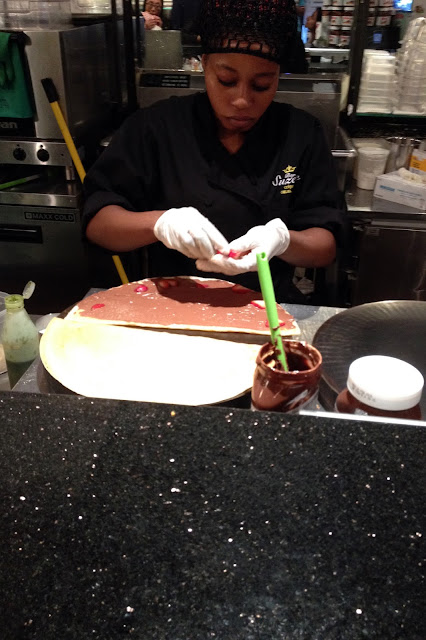 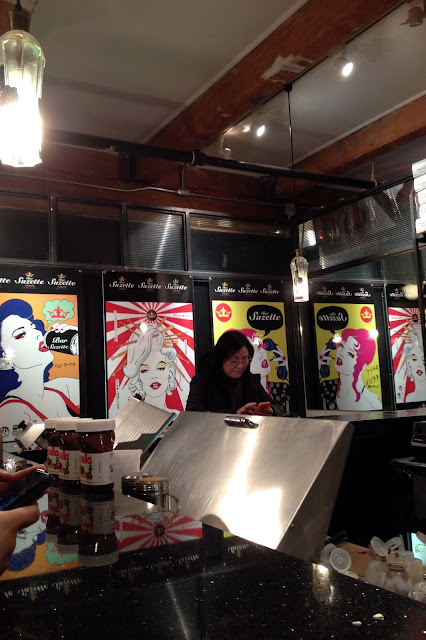 and then grabbed some coffee at Ninth Street Espresso before heading to the High Line. 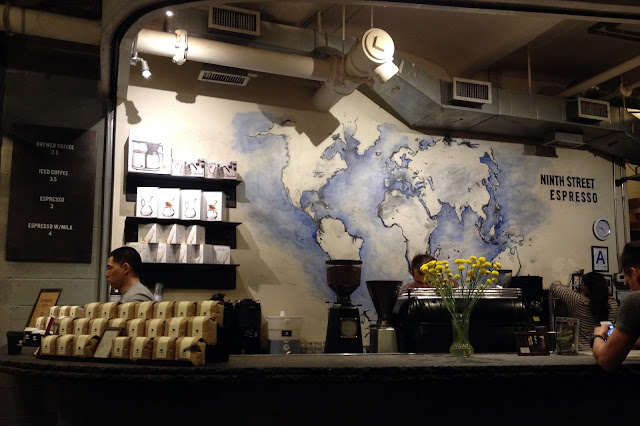 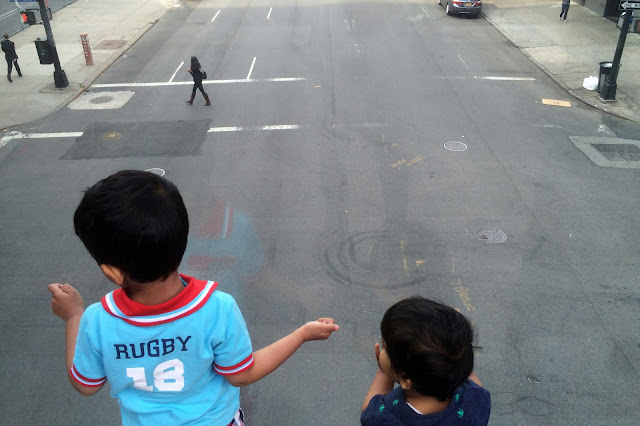 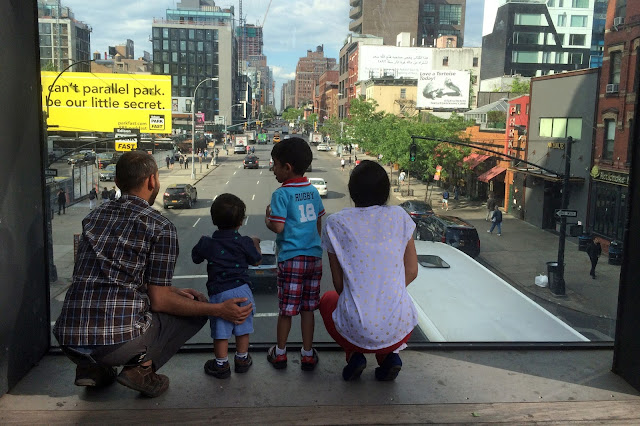 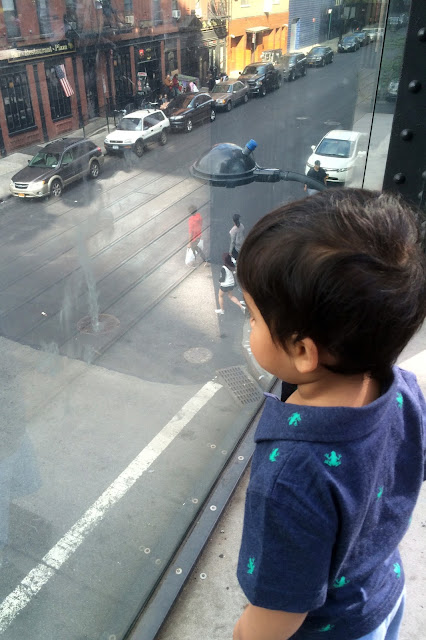 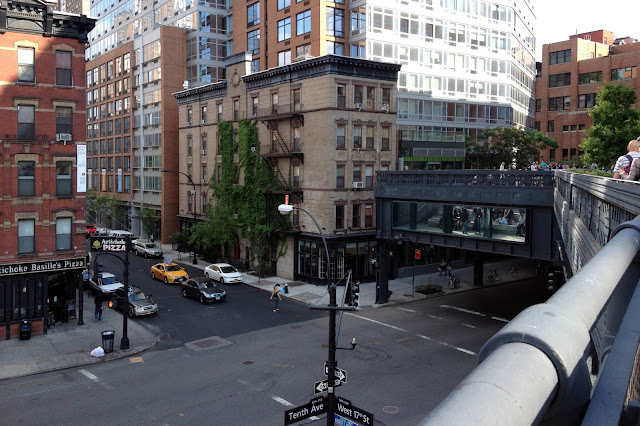 The cool viewing area in the bridge was where we started and one of our favorites.. pressing ourselves up against the glass and watching the buses zoom from right under us was so cool.. :) 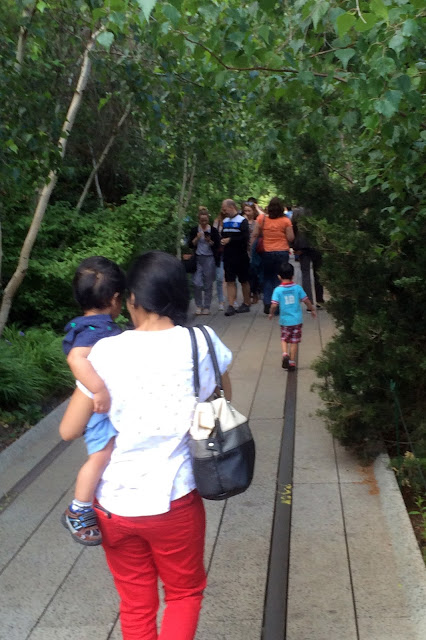 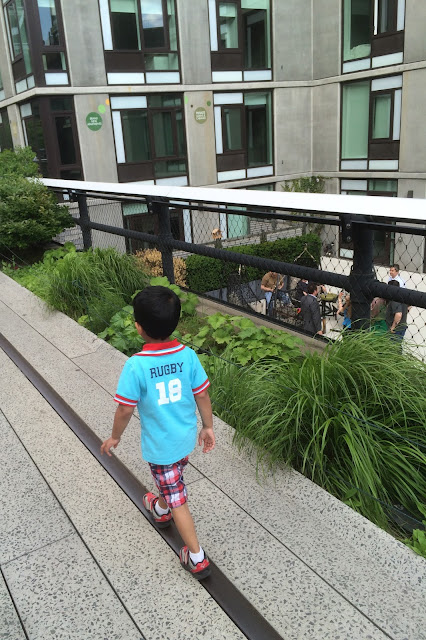 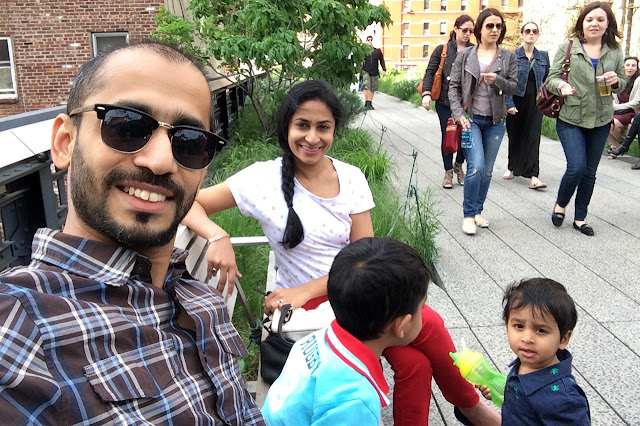 It was such a beautiful day.. and the park was such a pleasant surprise. The boys loved running around.. 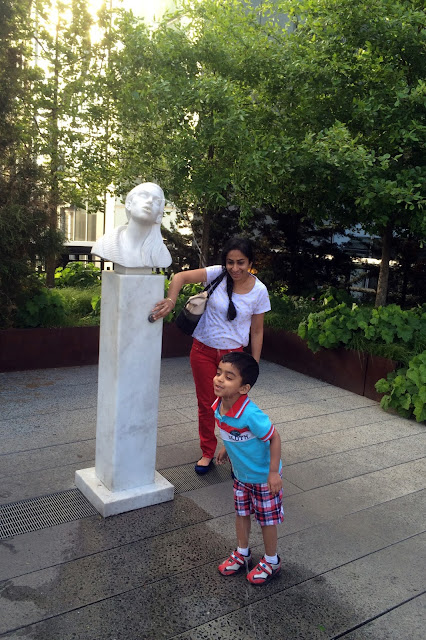 D attempted to drink from a water fountain that spit at you! We really should have made a video of that. And then we came across I Think Outside My Box, the brain child of David Everett Carlson. It all began in October 2011 in Zuccotti as an outreach program in support of the Occupy Wall Street movement. The idea that anyone can paint and that painting becomes part of an ever evolving global social fabric borne of self expression. Each person is given a 3x3 piece of cardboard to create on. 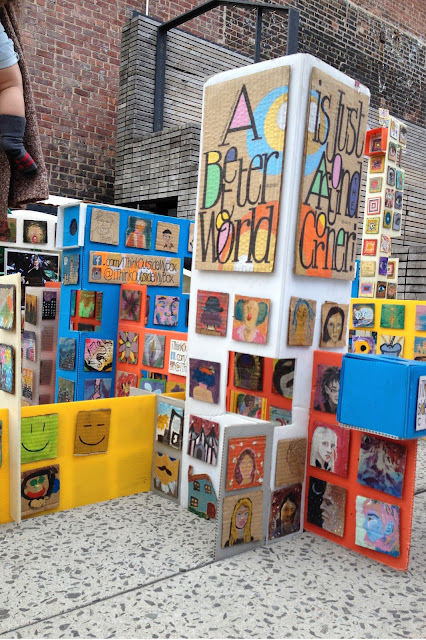 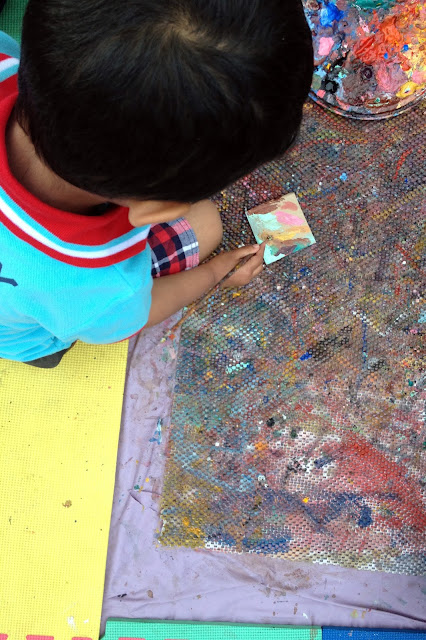 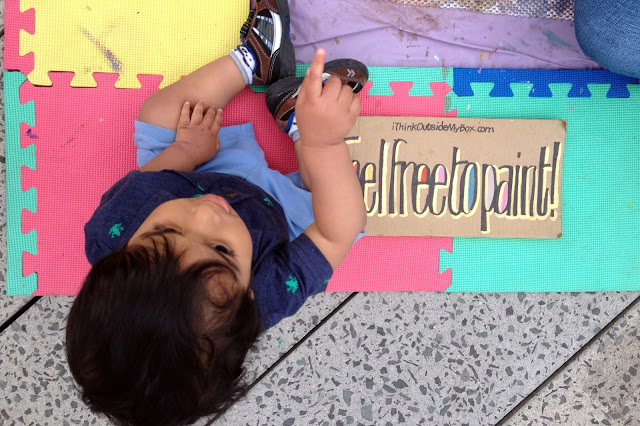 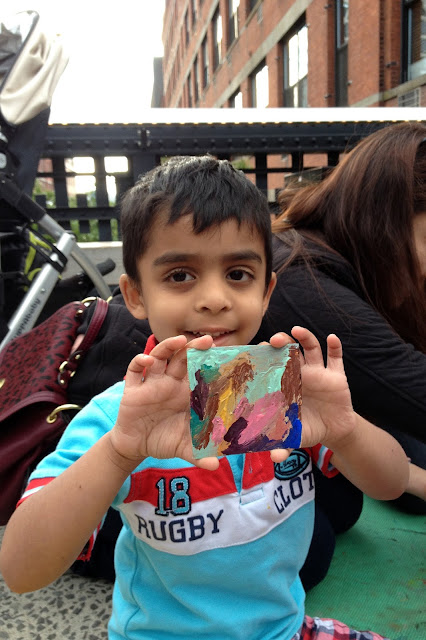 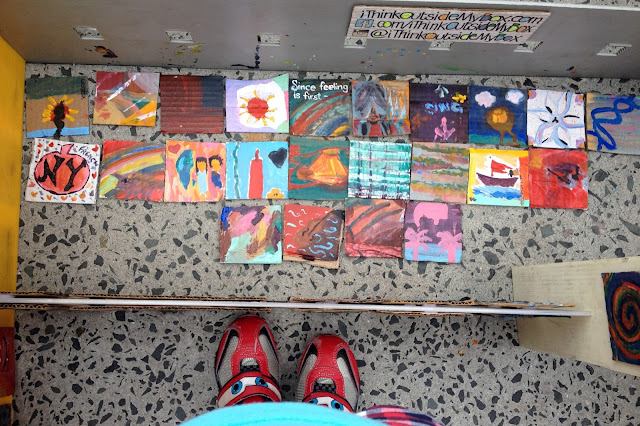 After walking along the entire park and back everyone was tired and ready to hit the market again for some more goodies. 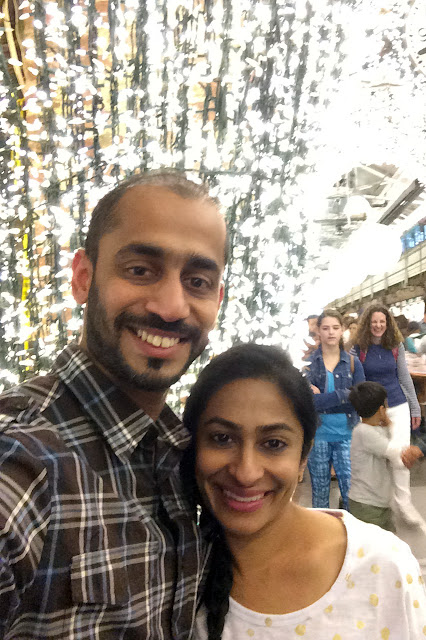 We went back to Bar Suzette for another crepe.. this time something savory.. it did not disappoint. And got a taco from Takumi, a Japanese inspired Mexican eatery.. yes you read right and it was so good.. 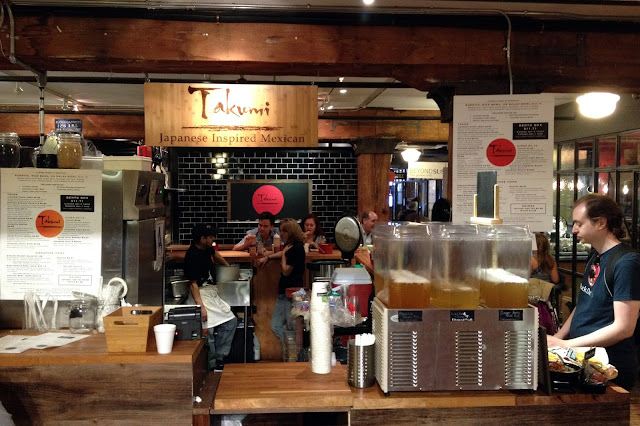 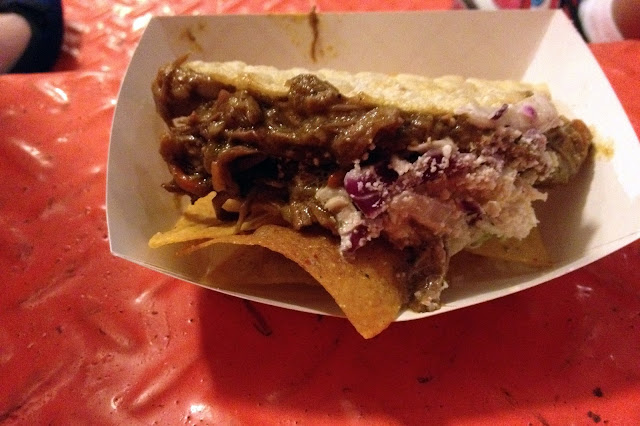 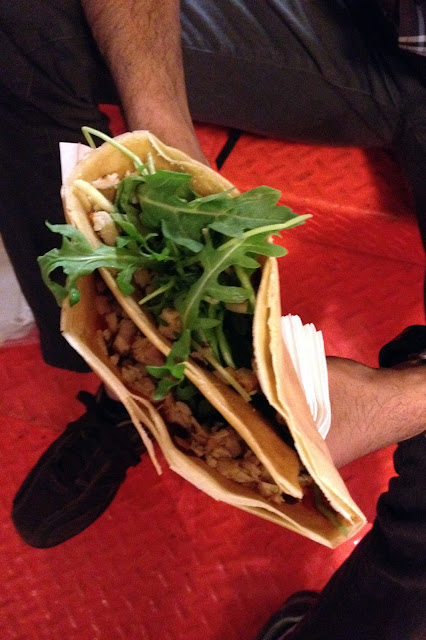 we followed that with more tacos from Los Taco's.. the picture taking took a break at this point because M was trying to put a cranky H to sleep while I stood in the long line for our taco's while D decided he had to go to the bathroom! Finally H fell asleep, we resolved the bathroom issue and devoured the most amazing taco's ever before one last treat.. gelato! How can you end a day of food without dessert? 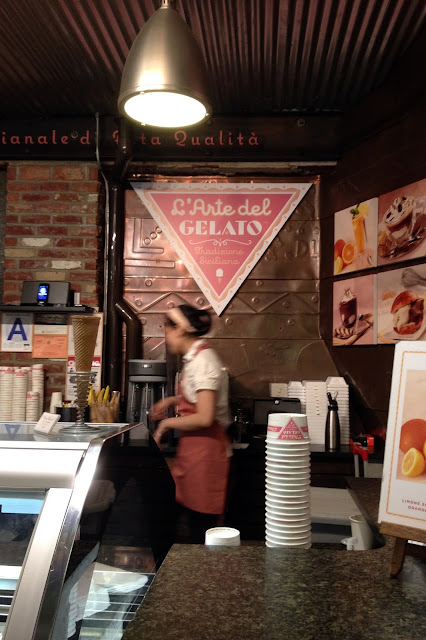 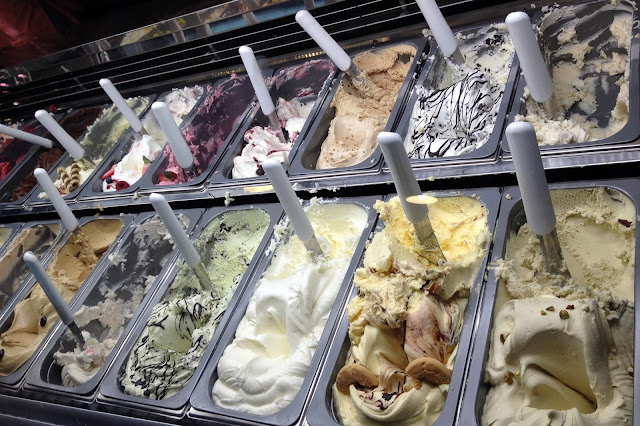 The boys fell asleep just as we made our way out of the city but not before catching glimpse of the Empire State Building... red white and blue 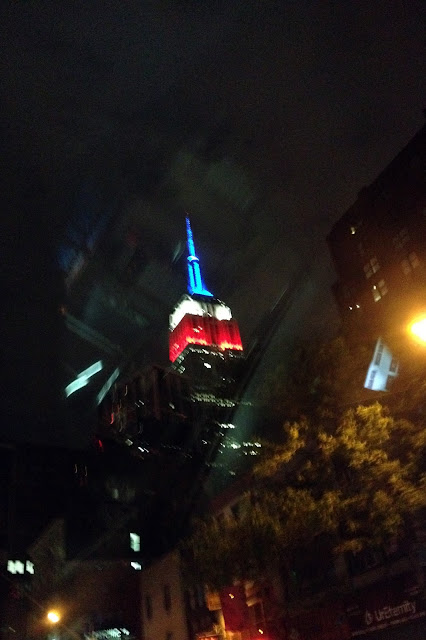 Jennifer Hays said…
What a fun day! I would love to visit both of these attractions. I've never been to either one. I grew up just north of New York City but it seems so much nicer now than when I was a kid, a lot more family-friendly things to do. I'm glad you had a chance to check these things out. Everyone looks like they had a really good time. I hope you have a good week, Hena.
6/15/2015

Melissa said…
Ooooh great post, Hena...made me hungry! I love that communal art concept..your little guy did a great job with his addition!
6/15/2015

Your Invisible Crown said…
Japanese and Mexican food? I am very curious what's cooking in their kitchen! And I like the art squares.
6/15/2015

Monique | WritingMonique said…
Gorgeous photos! The food looks great, and I love the worldmap on the wall!
WritingMonique

Stefanie said…
What a fun trip. I'd love to visit NYC again. Those doughnuts look hella good. It's always heartwarming to see the babies smiling and happy.
6/15/2015

Frannie Pantz said…
OMGoodness what a fun and lovely time it looks like you all had! My kids LOVE crepes and watching them be made is part of the fun! I love that photo of you and your family at the window. So special!
6/16/2015

Unknown said…
Aww what a fun fam experience!! Your photos are making me crazy with all those treats... doughnuts, crepes, and gelato!! SO. MUCH. YUM!!!

Emmylou said…
Whew. You guys did a lot! It looked like such a great time was had by all:) And how awesome is that I Think Outside The Box!
6/16/2015

Pumpkin Delight (Kimberly) said…
Being from LA, New York City is always such a fun place to visit because everything that can be done in one day. We can do a just a small portion of it here due to the size/spread of the city and the terrible traffic options of getting there. NYC, despite it's busyness, is surprising easily to get around. It looks like you had a fabulous time and did A LOT. It's a city that can be made to most of each day.
6/17/2015

Why Girls Are Weird said…
Oh my goodness you are making me SO HUNGRY.

Joanna Joy said…
These photos of crepes made me want to eat crepes. Yummy!

Loulou said…
Ha ... I just spent a beautiful afternoon out with a friend and what did we eat? ... Tacos and gelato!

That park is on my wish list too, but it's a little further away from me. You're so lucky to live close enough to drive to NYC!
6/18/2015

Gabrielle said…
The doughnuts you found at Chelsea Market look delicious - I can smell them from here! :) The photos of your family looking out of the window is really lovely by the way.


Gabrielle | A Glass Of Ice

Cam & Sarah said…
How fun! So jealous you can explore New York so easily - and the strawberry/chocolate crepe sounds delicious!
6/24/2015