- January 23, 2017
and we are already nearing the end of January.. what did we accomplish this month? so much.. and a whole lotta nothing. 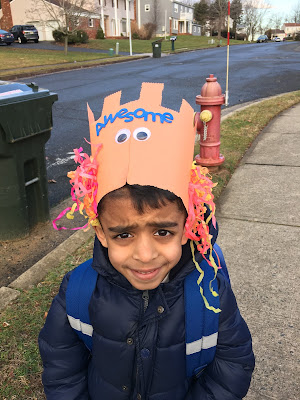 H has some skills of his own.. he is talking up a storm! He is quick witted and has a clever reply to anything we throw at him. While mostly amusing it get's difficult to keep a straight face when trying to tell him no! Which is a lot.. he is very fiery strong willed child. 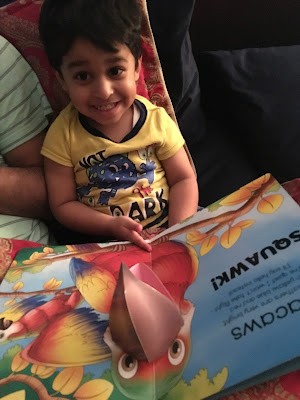 With D growing into such a great reader I have felt that I don't get enough time to focus on H. So I have been making weekly stops at the library with him. We don't spend much time there.. he is far too loud for a library but we pick up a board book or two and happy to report we read a minimum of three books a night. His favorite.. Brown Bear by Eric Carle 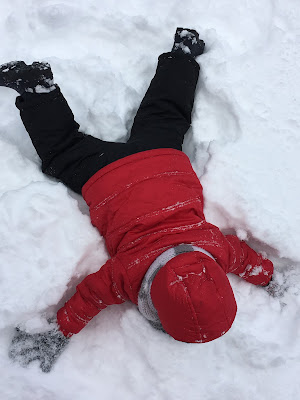 We had one great snow so far.. other wise we have had a mild and rainy winter.. H got the snow angel making direction mixed up. 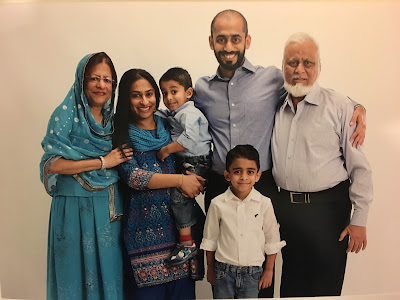 My in laws have shown interest in getting a studio family picture taken.. so when I found a Groupon for it I quickly snatched it up. Preparing for the picture itself was a task in itself.. planning a wardrobe. My MIL wanted to go traditional and I jumped on board. I didn't want to have to buy clothes so we dug through our respective wardrobe till we found a match. The picture turned out nice except for the fact that H refused to smile.. lol 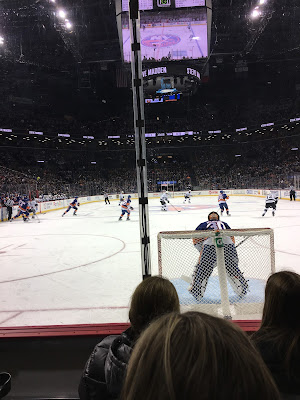 M and I found time to sneak out for two date nights this month.. thank you grandparents for making that possible. First we went to go see La La Land.. I wasn't convinced of all the hype till I saw it and I was moved to tears by the end of it.. and M and I talked about it the whole way home. This weekend we went to go watch a hockey game. I have only watched the Ranger's play so it was weird cheering for the Islanders but these seat were phenomenal.

How has your January been treating you?

Jennifer Hays said…
Hi Hena, it sounds like January has been good to you all! I'm so glad to hear the boys are doing well and growing a lot. Reading is so wonderful and I'm happy to know they both enjoy it. I've been taking my daughter to the library alone on Fridays after school lately when my son has a computer club meeting (she's not old enough to join the club yet). We have to wait around near the school for an hour and it's too far to drive home and back, so I take her to a public library near the school and we have such a good time. It's not out normal neighborhood library so there's a lot of new stuff she hasn't seen before. It's nice to spend time alone with her too, it doesn't happen enough. Your family portrait is beautiful! I'm glad you went traditional, you look so pretty. Thanks for sharing what you've been up to lately. :)
1/23/2017

Christina said…
Sounds like a good January for you. The family picture came out so well! You all look wonderful. January was a bit so-so for me - hopefully February will be better.
Christina ♥ https://caliope-couture.com
1/23/2017

Emmylou said…
Your boys are growing up so fast:) Congrats to D. My daughter loves both versions of the Charlie movie:)
1/23/2017

Straight A Style said…
Yay for date night! Looks like you all ave been having fun.

Anonymous said…
Thanks for the yarny comments. I love that you took a family picture. Yours and your MIL's outfits are lovely. Here in the lower east bay we have a large Indian community besides an Afghan one. I always admire the happy and bright colors of the tunics and pants the Indian mums wear. Some are ornate while others have some embellishment. I envy them especially when it's hot here as I feel they're cooler than I am and dressed smarter in such weather.
1/23/2017

Rowena @ rolala loves said…
Sounds like your family's year is off to a great start! How nice of the kids grandparents to make date nights possible for you.
1/23/2017

BLovedBoston said…
Looks like a busy and fun month - love that you guys snuck out to a few date nights! xo, Biana -BlovedBoston
1/23/2017

Gingi said…
WHOA!! I just read Charlie and the Chocolate Factory to my kiddos this month too!! BTW, your fam looks gorgeous! Happy to have found your blog! <3 - http://www.domesticgeekgirl.com
1/23/2017

Pumpkin Delight (Kimberly) said…
As an LA Kings' hockey fan, I'm SOOOO jealous of those seats. Holy cow! But NY? Why Not NJ? ;)
You know I love hearing about kids going to the library.
Beautiful family photos.
1/23/2017

cat eyes & skinny jeans said…
Cheers to the reading you have all been doing lately! I love Roald Dahl's writing - Matilda is one of my favorite books!

Hena Tayeb said…
Thank for stopping by Jennifer and the sweet words. Spending some one on one time with a child is very important. We try to do that with D especially since the baby of the family obviously gets more attention on a regular day.
I am a big believer in reading.. so I'm happy that the boys are following suit :)
We weren't initially planning in going traditional, in glad my MIL suggested it.
1/24/2017

Hena Tayeb said…
Thank you.. here's to a great February.. January is usually a little slow for everyone.
1/24/2017

Hena Tayeb said…
Thank you. I'm sure the graphics are way better for the newer one and I did show D some clips of it just wasn't sure how he'd take Depp's version of Wonka. This was the first time we had done a book movie combo so he was busy tallying up the differences.
1/24/2017

Hena Tayeb said…
I loved it.. wasn't sure how my husband would feel and he too enjoyed it. And he hates musical movies.
1/24/2017

Hena Tayeb said…
Thanks.. we hadn't planned on going traditional so I'm glad when my MIL suggested it.
1/24/2017

Hena Tayeb said…
thanks for stopping by!
That's great, Roald Dahl is such a great way to transition kids onto longer chapter books
1/24/2017

Hena Tayeb said…
They were amazing seats and the Islanders beat the LA Kings!
Why NY? NY takes over NJ in almost all aspects.. they are rarely represented in any sports so even though we have the Devils we are already so used to associating ourselves with everything NY that they are easily overlooked. Also my husband get these tickets from his company. :)
1/24/2017

Hena Tayeb said…
Thank you.
I really liked it and surprisingly my husband who hates musical movies did too.
1/24/2017

Loulou said…
Congratulations D! Your boys are adorable. You must have so much fun with to them. Here's to Charlie and the Chocolate Factory, the Gene Wilder version! Love it so much.

Unknown said…
Awww Charlie & the Chocolate Factory is the best book! I still read it even now! xx

Unknown said…
Hi, what a wonderful blog. I found you through the Etsy blog team. I'm at Nature in Things.

You bring back my memories of the proud days of our children's successes, my kids are grown now. I miss the children's books, they are so creative. Sounds like you have a wonderful family.
1/24/2017

Parrott Ponderings said…
So awesome that your boys love books so much! My oldest has always loved books, and is now learning to read. I am hoping my youngest will be the same way. I have heard so much about La La Land. I may have to go see what all of the hype is about. That is such a beautiful family photo!
1/24/2017

karen said…
looks like you did get a lot done by living and enjoying life. The photo of your family is precious :) I saw la la land and enjoyed it, especially the ending!
1/25/2017

2justByou said…
I absolutely LOVE the snow angel picture!!!
And Godiva Cheesecake? I need a piece of that!
I can't believe it's almost February. It doesn't seem like it, but it is.
1/25/2017

Hena Tayeb said…
thanks you
yes, it's the ending that really set it apart from other movies.
1/26/2017

Unknown said…
I can't believe that January is almost over!! And both of your date nights sound amazing!

Angela said…
It's wonderful that your child likes to read. I hope he continues to always have this love of reading. Your days are going very well!! We are quite North so we will have lots of Winter yet but I am already dreaming of flowers and green grass.
1/26/2017

Anonymous said…
Your kiddies are the cutest omg.. Love the snow angel face down picture. Lol
1/27/2017

sugarlens said…
Oh my gosh, I can't imagine the visual spectacle you guys will experience at the Charlie and the Chocolate Factory show. Very exciting and congratulations for raising such a little reader!
2/07/2017